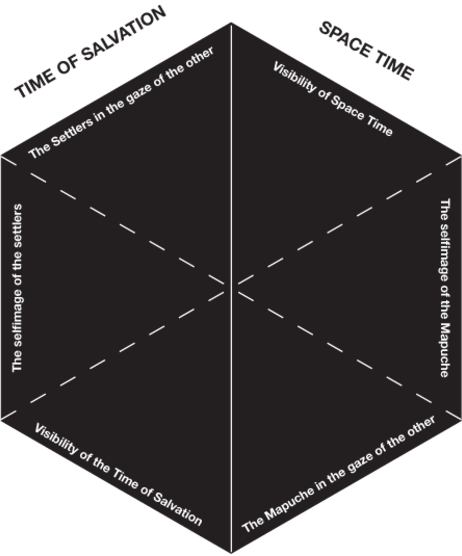 What if one took into account the fact that time in History telling is dependent on space and place? That the notion of time is a cultural construct and far from being neutral? That western time is marked by the Christian doctrine of salvation?

In the southern Chilean regions of Araucania and Los Lagos very different approaches to time, nature and landscape clashed – those of the native Mapuche and those of the European colonialists who settled here during the 19th century.

What if landscape as a slow medium allowed us to understand the multifaceted nature of time?

In the video New Brothers, both Mapuche people and descendants of the German settlers take a look at their landscape and tell about its formation. Professional historians and museum officials reflect on their practice of writing history.

For the web publication, we structured the 66 sequences of the film Neue Brüder (New Brothers) around the different notions of time: Time of salvation and Space/time. We further structured the sequences according to whether a person speaks about his own culture or that of the Other. The column “visibility” stands for what is actually perceivable in the landscape and in cultural artefacts.

You are invited to discover the work by navigation in those terms or you can see the entire 130 minute version of Neue Brüder here.

The selfimage of the settlers

The settlers in the gaze of the other

Visibility of the Time of Salvation

The Mapuche in the gaze of the other

The selfimage of the Mapuche